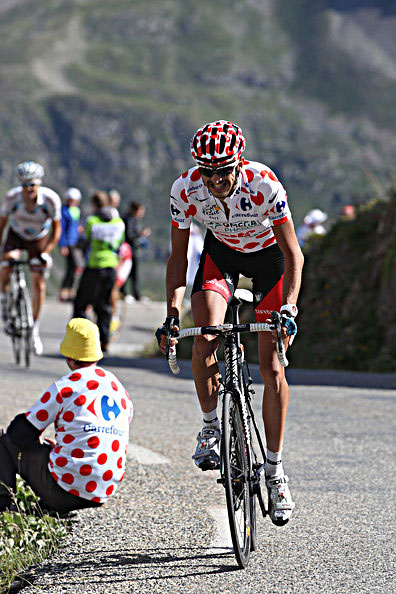 Vanendert on the summit of the Galibier, stage18
2011 Tour.

Carolle and I returned from the North Vancouver Community Arts Council and brought our products to have juried for the Canada Day Craft Show. Good news... we've been accepted!

Why not plan a bike ride in North Vancouver for July 1st and enjoy the bike friendly confines of Waterfront Park?

Come and see us and we'll have plenty of our famous cycling caps and re-cycled bike inner tube accessories for sale. We hope to see you there! 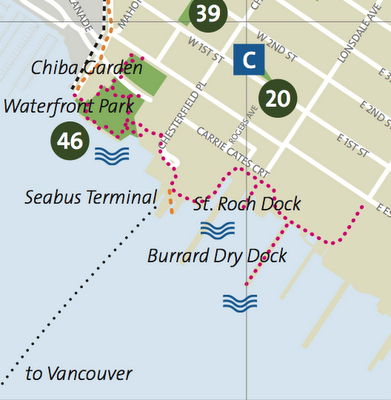 on May 28, 2012 No comments:
Email ThisBlogThis!Share to TwitterShare to FacebookShare to Pinterest
Labels: craft show 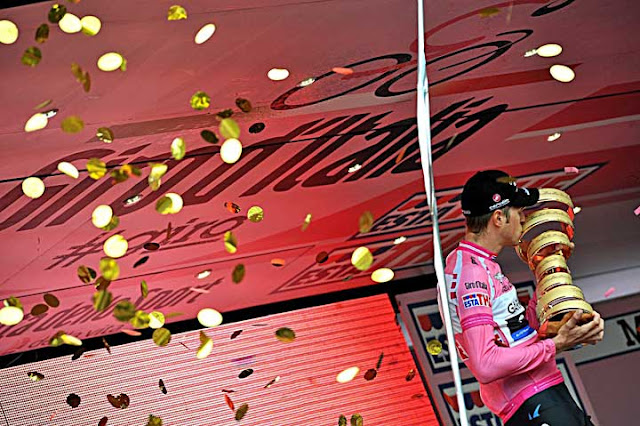 "Once I start seeing my name on the list of other riders who have accomplished this,
it's pretty amazing."

He's eclipsed Steve Bauer's fourth-place finish in the 1988 Tour, and he is ushering a new era in Canadian cycling...

"Canadian cycling is at the highest level it's ever been and this will only help."

Carolle and I proudly witnessed this wonderful achievement this morning... and, in a way, our country shifted for the better! 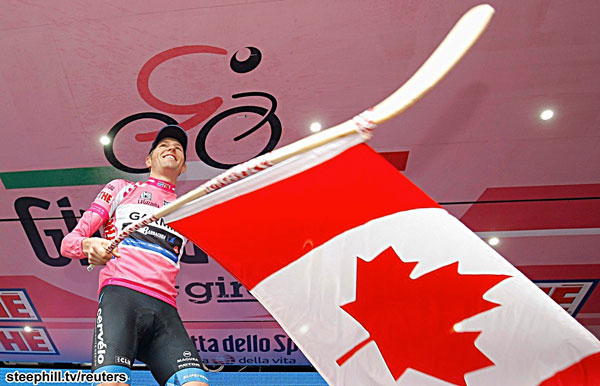 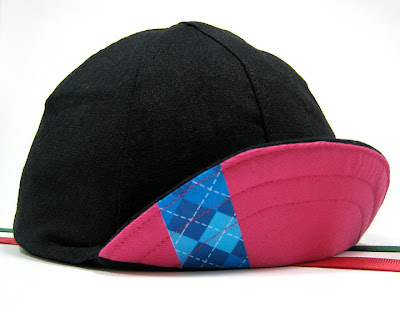 For the past two weeks Carolle and I have a morning ritual... 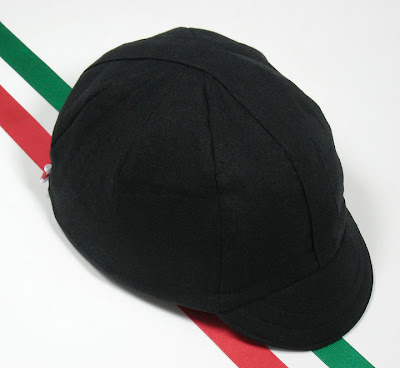 
Stage 14 was an epic ride for Ryder on the steep climb to the mountain top finish in Cervinia. Going into that cold and rainy stage he surprised everyone including leader Joaquim Rodriguez by attacking the favorites with 3kms remaining. An attack that worked putting time between the contenders. That day, he took enough time out of Rodriguez to win back the pink jersey and to declare to the rest that he is a contender for GC.

We decided to design a special cycling cap for this occasion. I wrote on twitter that we would be designing the cap and, right away, I receive two twitter messages with interest to buy. Our first prototype was made from black cotton denim. I showed it to my FRFuggitivi group and they mentioned a lighter fabric would work better. Back, to the work table and we decided to change the fabric choosing a lighter linen/cotton for breathability because of the Spring warm weather.

Honoring Ryder Hesjedal's gallant ride up to the ski station of Cervinia to recapture the pink jersey. It's black linen/cotton with special accents: pink under brim with the blue argyle stripe and proudly finishing with a Canadian maple leaf ribbon. 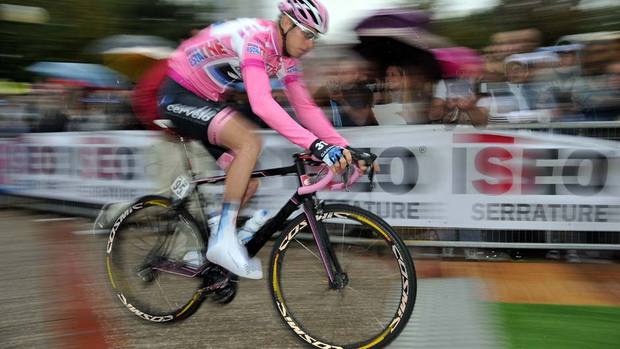 We like to honor Ryder Hesjedal's brilliant ride on stage 14 of the Giro, up that final long climb up to Cervinia. His results was a gutsy ride taking back the Pink Jersey from Joaquim Rodriguez.

Carolle and I designed a cap for this wonderful occasion. And, yesterday I showed it to my FRFuggitivi teammates with good feedback. We've decided on a different lighter fabric, comfortable for this time of year. Yesterday was cool and wet but we're confident Summer will arrive.

So, we are back re-modifying our design and with the slight changes made we will make this cycling cap ... even better!

Stay tuned for the unveiling!
on May 21, 2012 No comments:
Email ThisBlogThis!Share to TwitterShare to FacebookShare to Pinterest
Labels: cycling caps 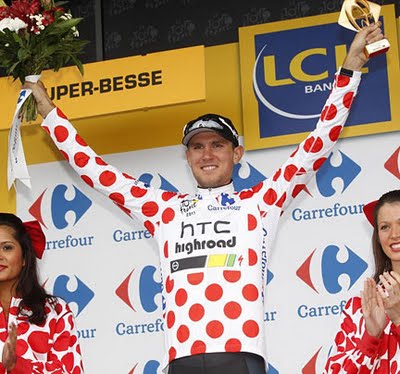 American, Tejay van Garderen is one of those promising riders that excel in Grand Tours. Known as a time trialing specialist he's also good in the mountains. In the 2011 Tour de France stage 8 he won enough points on the cat 2 climb to earn the KOMs jersey and Most Aggressive Rider honors. He became the first  American to wear the KOMs jersey in the Tour! 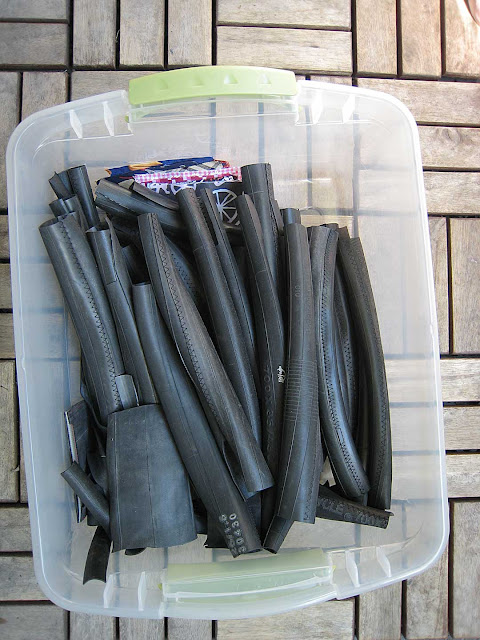 Ready for the next phase of production!


It doesn't look like much ...yet. Rubber inner tubes, washed and cut and ready for the next phase of production.

Our Spring production is revving up, as we are working on new inner tube products. Yes, we've been happily busy with wholesale cycling cap orders and now it's inner tube time.

Carolle designed a new product and we're both excited... we'll be launching it and more very soon!
on May 14, 2012 No comments:
Email ThisBlogThis!Share to TwitterShare to FacebookShare to Pinterest
Labels: inner tubes 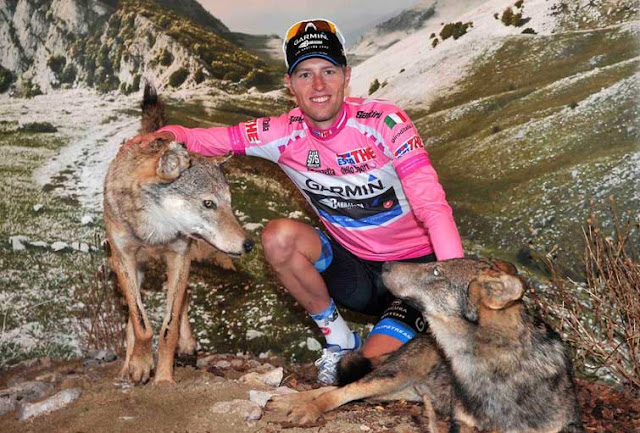 Congratulations to Ryder Hesjedal as the first Canadian to wear the pink jersey! 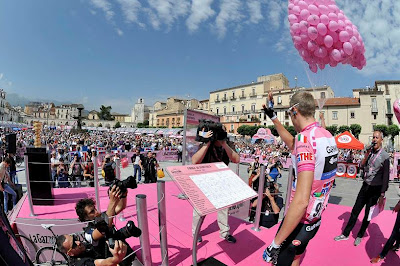 Signing in today's Stage 8 in Sulmona 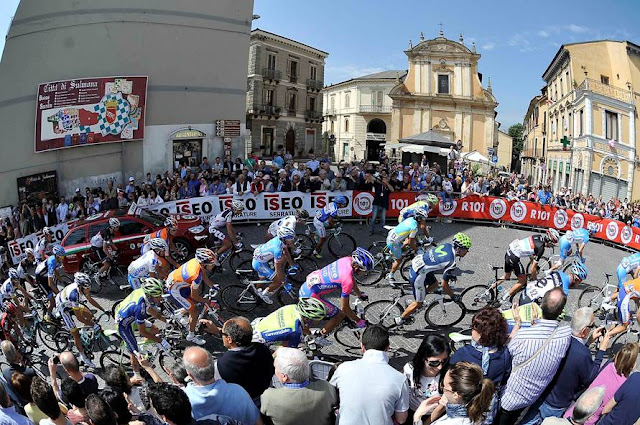 At the beautiful start in the city of Salmuna
on May 13, 2012 No comments:
Email ThisBlogThis!Share to TwitterShare to FacebookShare to Pinterest
Labels: favorite jerseys, Giro d'italia, Ryder Hesjedal 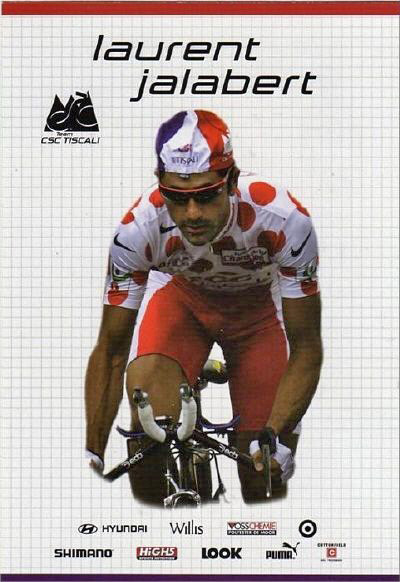 One of the great French riders to ever ride was Laurent Jalabert. Love his
nickname, "Jala" for a glass of wine because he continued drinking wine as a professional.
A fantastic rider in single day races and in the Tour won 4 stages and the KOMs
classification twice in 2001 and 2002!

on May 09, 2012 No comments:
Email ThisBlogThis!Share to TwitterShare to FacebookShare to Pinterest
Labels: maillot à pois rouges, Tour de France 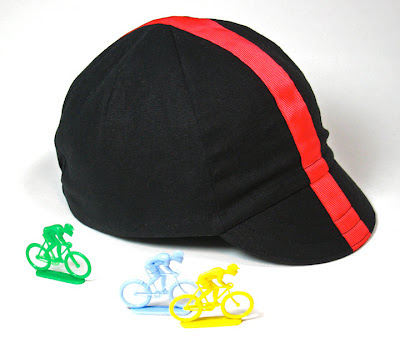 
In the early days, of our company, the Cappello da Ciclismo Nero cycling cap had it's humble origins  in all black. Then we revolved with a stripe that ran all the way to the brim. We experimented with the stripe color; blue/black and red/black.

Recently, we made a custom cap order for a client, and it reminded us of the old Cappello with red stripe. Well, we decided to bring back an old classic, and call it... The Cappello Nero Rosso Cycling Cap! We love the racing red, Italian for... rosso!

Made from Linen/cotton. Linen is a wonderful fabric, it breathes and wicks well. The cotton makes it comfortable to wear... a classic combination. Now, we have the classic Cappello; all black and the Rosso! 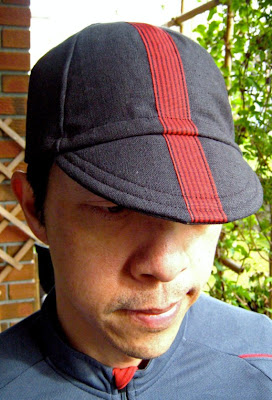 Back in 2009...
Cappello da Ciclismo Nero with
the continuous red/black stripe.

on May 07, 2012 No comments:
Email ThisBlogThis!Share to TwitterShare to FacebookShare to Pinterest
Labels: cycling caps 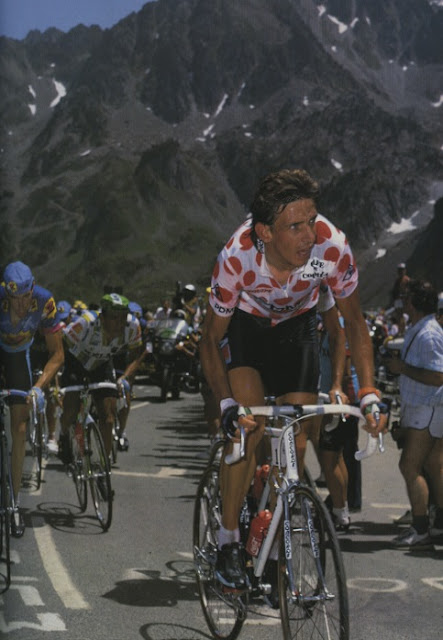 
Steven Rooks was one of the Flying Dutchmen to excel in the mountains of the
1988 Tour de France. He soloed to win the Alp d'Huez stage and took over the
KOMs classification wearing the polka dots jersey all the way
to Paris. 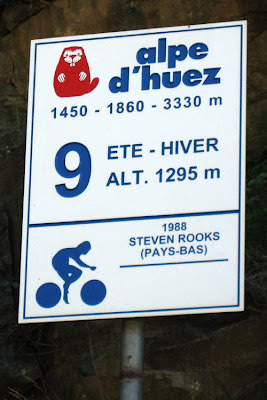 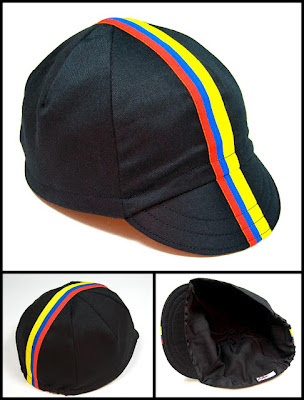 This morning Klaus sent me this wonderful comment on the Cycling Inquistion Cycling Caps made by Carolle and I. You can purchase it here.

We know our cycling caps are very well design and beautifully handmade to our rigid specifications. For me, classic is the way to go. I am passionate riding my 25 year old steel lugged Marinoni and I could not imagine riding without one of our classic cycling caps.

After a few years of designing and re-designing, we're very confident to offer the best cycling caps we can make.

To be compared to the famous Rapha it certainly makes us feel that we're finally breaking away and catching up to the head of the peloton in cycling caps.

"Thanks for the LBL recap Klaus, but I'm writing more to say thanks for the Cycling Inquisition cap which arrived here in the UK a couple of days ago. What a lovely piece of kit it is, and if anybody is considering buying one I can honestly say it's the best cycling cap I have ever had. It is;

> Made with lovely, substantial cotton, not the thin stuff on cheaper, throw away musettes.
> A proper size large with a deep "bowl" that fits more fully than a casquette.
> The peak is stiff but not plastic and so will not break like virtually all cycling caps that I have.

I have several Rapha caps for which I pay their price premium in part because I like the design but mainly because they are sized and I need a larger cap for my big head - one size fits all tends to be a bit tight on me (a skull krusher you could say). The Cycling Inquisition cap beats the Rapha hands down in most "departments" AND is cheaper. The material is better, the "build" quality equal, the design better and, best of all, I won't ruin it by accidentally (and irreparably) snapping the peak. Call this a recommendation ..........."

Steve from the UK.

on May 02, 2012 No comments:
Email ThisBlogThis!Share to TwitterShare to FacebookShare to Pinterest
Labels: custom cycling cap, cycling caps, feedback 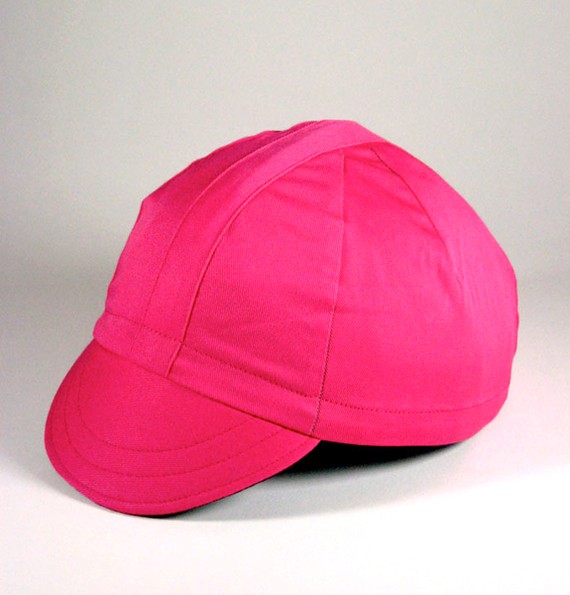 
The Giro is almost here...

We couldn't be happier.

To honor the most beautiful race, we have the Forza Italia Cycling Cap on the weekly sale! Only 1 of each size in stock!

Wear this pink Forza Italia cycling cap proudly... be part of the Giro! 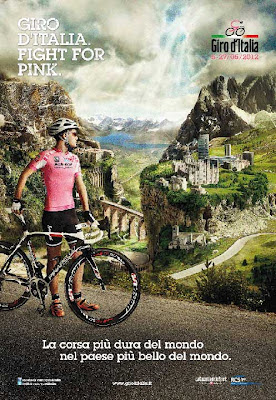 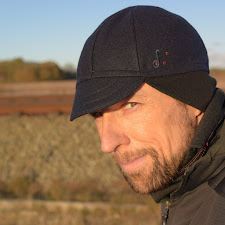 We are temporarily closed and will be back soon!